Pictures from yesterday's half

PR in a dress

The World-Record Perth 5-mile Kilt-Run is over. We got to spend some great time with our family in Kingston.  The race was better organized this year and a lot more fun, (although we missed the sheep shearing from last year).  The run was tough again.  I don't know whether it was the later start of 6:30 pm (all my races are usually in the early morning) or because it was a summer-run just after the solstice and the full sunlight and heat, or maybe something else, but it was tough. 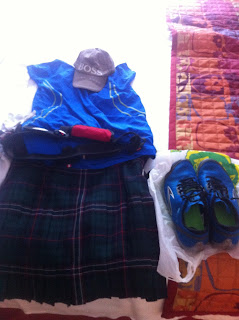 No alcohol for this race - no alcohol for 1 week before this race.  Of course I drank alcohol right after!  Hydration and electrolytes were well managed, I ate small meals and added a little extra carbohydrates for the last few.  I was well rested.  I trained well, and kept a good attitude for the race.  But it was still tough!

I felt much better for the first 35 minutes of this run.  I kept to a good 10:18 minutes/mile pace, setting myself up for (I thought) negative splits at the end, and then at a the 40 minute mark about 3 3/4 miles into the 5 miles I started to fade.  I felt like I was cooking on a grill.  At the 40 minute mark my heart rate was 160 BPM (92% of Maximal HR).  I was breathing easy, smiling at the pipers, the harp, and flute players.  I started to slow down, more to give my heart a break than because I felt my muscles were tired.  I was doing good, but my body was fighting the heat.  Definitely all the extra weight I was carrying.

One high-light was that for the last 400 yards I managed a sprint that brought my split pace down to 7:50 minutes per mile.  For others that's not a sprint that's a pace, but for me it was a sprint.  At one point near the finish line I had accelerated to 5:18 minutes/mile.  (My finishing HR was 174 - 100% maximal HR.)

In brief, I improved in every area in this race, even if only slightly.  A minute and 17 seconds improvement should count for something.  I didn't keep to my running strategy entirely and this will be addressed later.

Posted by Andrew Opala at 10:49 AM No comments:


Positive splits! Definitely would be an improvement to run this backwards. Look at these impossible HR numbers too! There are a few things I should note:
Recently, I ran the 3 miles at 9:47 … downhill/uphill/corners/turns. I need to be confident that this type of speed is possible over 5 miles. This race will have nearly the same elevation differences as the runs I have been running this past month. About 120 feet from low to high.


So my strategy is

There are a few things I should note:

Posted by Andrew Opala at 8:45 AM No comments: 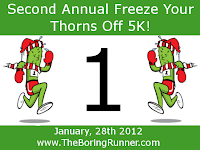 a.k.a. Game of Thorns
a.k.a. how to run with an ingrown and broken toe nail
a.k.a. This is where the running turns around baby!

I've kept to my running schedule since my bull-shitake run two weeks ago.  And it's been basically consistent crappiness interspersed with bought of sheer loserdom.  So I needed a run to turn it all around.  And this one was it baby!

Today's run was a complex 2.9 mile warm up, 3.2 mile virtual race, plus 1 mile stagger home.  Did I mention I operated on my toe last night at 4 in the morning?  My toe cracked on my run yesterday, and I pulled out the broken piece, but there was a piece left in and it began to grind into the fat cheeky part of my big toe while I was sleeping.  And at 4 am I couldn't take the pain and dug the rest of the nail out.  Taped the toe up with gauze, rubber bands and put two tight socks on the foot and went for the run.

The pain made me run in a funny way.  And when I uploaded my track from the Garmin I discovered the thorny problem. 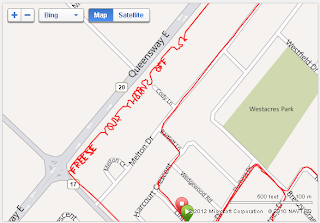 Here's the interactive route if you want to take a look:


I think if I could figure out which way the "s" and "z" go I could open up a GEO-Writing business.

Thanks for another wonderfully directed race Adam! 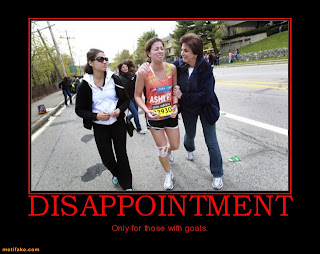 - no Energy (I felt at mile 1.5 like I felt at mile 13 of the half last summer)
- no Desire (I was thinking of stopping and breathing)
- no Visualization (my mental image leaving the house was of me leaving the house)
- bad Music (Juice Newton was in my friggin playlist!  I don't listen to Juice Newton!)
- poor Equipment management (shoes clogged with mud, earphone falling out of ears, draw strings all knotted together)
- Hydration problems (dry mouth, drinking all the time, peeing all the time)
- poor eating cycle (ate about 1 hour before running - 3 bowls of vegetable soup)


Sorry about the run.
Peel back the layers and figure out what was going on,
you are a master at that now! :)

Today I run again ... I MUST BE STOPPED!

... gears are turning ... things will be analyzed!

I hit the wall on an Interval run! 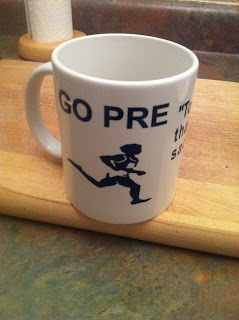 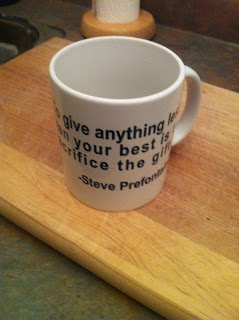 and a signed cover from Guy Kawasaki: 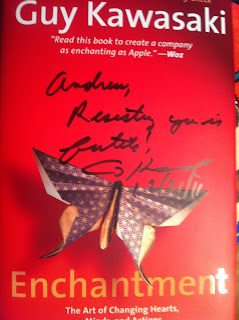 My first run this year!


It wasn't really base pace for me because it was freezing cold!  It was 15°F light flurries, feels like 1°F (-9°C feels like -17°C).  Winds were from the north at 15 m/h (24 k/h).  My only defense was Alpaca socks, two track pants, cotton turtle neck, thermal sweatshirt, windbreaker, mittens, and toque.

Things to improve for today: drop the fat, increase the protein, add some more good calories, increase the lb-age on the weights slightly for tomorrow.

I hope you have all started the New Year on a positive note.  To quote EMZ: You've friggin GOT THIS!