As of writing, I am invisible in the table of finishers - it appears that my bib chip didn't register.  I emailed the RD and the event timing people.
Race Report:


Preparing for the race started on Saturday evening. 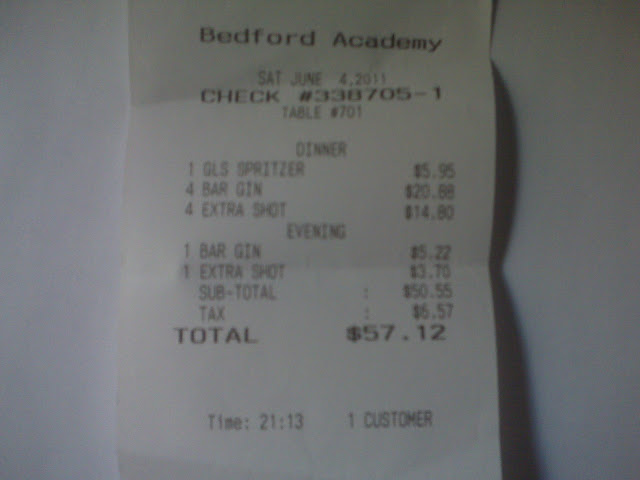 We went to Joe's 40th birthday party at the Bedford Academy in the Annex, and I had a double gin and tonic and got my wife a wine spritzer.  Three hours and a lot of stories and laughter later, I had consumed another 4 double gin and tonics.  We took the subway home to Kipling and my wife drove rest of the way home.

Knowing how much alcohol dehydrates I decided to drink some water when I got home. But alcohol also makes you forget so I forgot.  Luckily after we went to sleep, a blocked number called us at 4:09 am and woke us up.  I went downstairs to have a glass of water.  My head was spinning and aching and I laid in bed until about 5:30 when I fell asleep.  The alarm rang at 6.

"Six?  why so early" you say, since the race was about 15 mins. away by car.  Ahhh, we were driving Matthew to work in Milton! So we piled in the car and I hammered my foot to the floor in a way that the angry patriarch knows how, and we dropped everyone off and started to drive to the race.  My sister, texted, called, and sms'd asking about where the race was, and then told us she wouldn't make it.

Got changed, threw my music on, then removed it, threw my water bottles on, then removed them.  Sipped a little bit of Gatorade and lined up for the start. My wife was getting the troops ready for the 1k fun walk/run so I buzzed off to zone and get psyched up (but mostly to pee).   I hung back at the end of the joint 5k/15k start - no sense in taking other people's spotlight.

This was a LSD for me on the training schedule.  So I was running base for more than half of it and trying to speed up each K after the halfway point.  It didn't really work out that way.  It was very hilly.

I managed a good base average until about mile 4, and then trying to speed up was increasingly difficult.  If you look at my HR you can see that after about the halfway point my HR stabilized but nothing much happened.  My goal was to keep calm and try to boot it down hills when they came.

At about the 3 mile mark, I was feeling pretty smug.  I usually feel crappy after those kinds of birthday parties.  And here I was running a third of a marathon!  I could only think "Wow I am awesome".  And then it happened.  Somebody started performing an autopsy in my intestines on the sushi I ate last night.  Then whatever was in there started to adjust it's location.  Then rolling thunder and the approach of child birth! huh? People with loud music blaring in their headsets turned to see if an Alien child was about to be born.    I spent miles 4 and 5 chanting, "never trust a fart, never trust a fart".  My only fear was to relieve myself in a crosswind to have some hot acid liquid start dripping down my leg.

It all calmed down as the day started to heat up.  It was 30 C in the shade (86 F).  As I started to warm up, I felt like the prison system, which was my intestines, went into lockdown mode.  And the previously liquefying milieu of party food seemed to disappear from attention and now I was fighting dehydration.  The last two water stops were three fisted drinking - one Gatorade and two waters.

Finally, the last turn and the finish.  I even managed a bit of a quickened pace and a sprint at the end.

My wife, was at the finish line cheering me on, and she just managed to make it over from the 1K finish-line behind the school we stared from.  My gang was getting a little bored at the race, so as soon as we arrived, I was made aware of the sour-pusses and their need for some excitement.  Funning thing is I hear my wife's voice yelling "Baby!", and then someone else yelling "Andrew" ... and they're standing right beside each other. It was my wonderful supportive wife, and Barb from Still Running (and Phil).  We have these pictures somewhere, but of course I don't have the camera in front of me to upload them.

And my bling, a nice technical shirt, a medal, and the bib (with chip) that will go down in infamy! 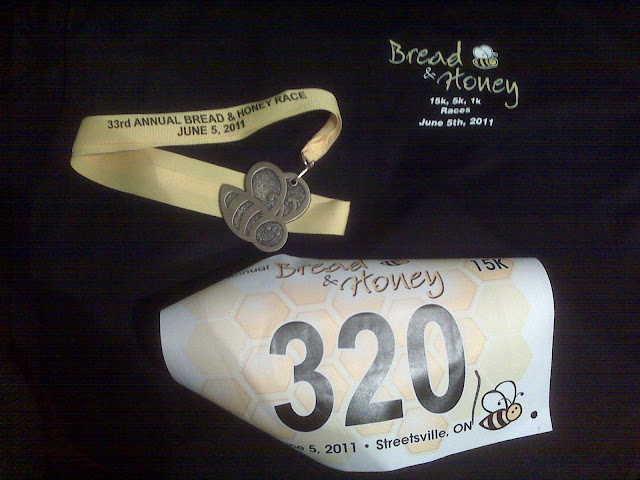 So, as I write this morning, the race director replied that they will forward my Garmin stats to the timing company.  I don't know if they can just put that info in without verification - but it was kind of the RD to suggest this.
Look back on all of it.  I should have had another double at the party.
Posted by Andrew Opala at 8:50 AM

eeeee gads. Not a good way to "prep" for a race.

But you survived it. And made me laugh with the race report.

Bummer that they lost your results.

I'm digging that bee medal, though.

Jill@Run for the Hills said...

Ugh, I don't know how you ran hungover, but I sure laughed at your report! You may consider vodka tonics next time...they seem to treat you better the next day.

I really like the bee medal too! Very unique.
Congrats!

Cool Bee medal...I don't know how you even ran.... I have been in a few races with the chip on the bib and never had problems...doesn't mean I still don't worry about it..

Seems like every time I come over here you're displaying some ridiculously hilly elevation chart. Perhaps you need to visit Chi-town for some flat and fast....plus we have ridiculous heat...and plenty of the alcohol you're apparently fond of as well.
Totally digging the bling!

Well done! You finished a 15k race and that's all that matters. The rest is just part of the fun and history. I like that medal too! If this was a LSD you did everything right.

I have heard of carbo loading before a race, but gin and tonic loading? Hmm...
Were you dipping your timing chip in it by any chance?
Good race though. Congrats.

I've prepped for a race that way with a few beers and a few drams of scotch and then gotten up and thought, "yeah, this is gonna be fun." Good job on toughin' it out. That is a good time for an LSD "race" too.

it's all about pace said...

This race report totally cracks me up! Great Job! To bad they lost your results. Hmmm.... I might have to try that pre race night - then maybe I wouldn't be so "nervous"!! :)

That race medal is adorable.

"never trust a fart" would make a good running shirt motto. I've never had any sort of trots, but my brother had to drop trow in the bushes once when we were on a run. He said he had 30 seconds to clear the way before the dam would burst, and ran into the brambles and I stood there laughing and laughing and laughing.

yikes that definitely doesn't sound like a case of the glitter farts. they tend to smell like roses and sunshine after newly fallen rain.

congrats on getting through that puppy!! :D

Why oh why do I laugh so hard at bodily functions? Congrats!

You should keep up the protest about the lost timing, since that's what they used for the prize draws. You could have won a fabulous prize if only they hadn't lost you. Congrats again on a tough race.

I'm so sorry you were a ghost!

That medal is adorable.

I love your bling, I want them... bummer about being invisible tho.

Ha, I've ran some training runs like that, but never a race. Cool medal.

And once running, I would have puked at least a couple times haha

great job on finishing the race!

nice job, sugar. keep it up.

Not much afraid of your coach are you? :) You'd think you would lie a little about how much you drank before a race!

Good job...I guess it works for you!

You and I pre-race prepare pretty similarly. Alien Baby was freak'n hilarious, I hate that in a race and I am totally stealing your chant. LOL

You're cracking me up!!! Love the medal,congrats on finishing after all that!

I love that medal, and your comment about rolling thunder made me laugh out loud. Boy, oh boy, that is never a fun experience. You definitely know how to prep the night before, though! My brother is a big fan of running hungover...well, he seems to do it a lot, anyway...and he always beats me. Maybe I should drink more. At least then I'd have an excuse.

Hi Andrew,
sux they didn't record you. I went through that and the end of my first ultra.

The really good races have a video camera recording the finish line with a clock visible. Then they can always go back and take a look.

It's a really good idea. It's not like video cameras cost that much these days.

You might suggest that to them for next time ;)

I think I love the reciept just as much though. Hilarious.

Props to you for taking on the pre-race meal that you did. I've never had the balls to drink adult beverages the night before a race.

I've administered the chip timing in the past and it is rare to miss a chip, but very possible, and it does happen, obviously. It should be pretty easy to add your time to the results.

Interesting approach to a race. Four g/t's? Remind me to never try that. For being that hot your HR looks pretty good. Nothing too crazy. Good job Grasshopper.

Congratulations, that's quite the course! Good thing you had your Garmin on I guess!

Available Instant Loan Offer For Everyone In Need Of Loan
We stand apart from other lenders because
we believe in customer service just 2% interest rate,
both long and short term you have come
to the right place I'll advise you can contact us via email
abdullahibrahimlender@gmail.com
whatspp Number +918929490461
Mr Abdullah Ibrahim

Available Instant Loan Offer For Everyone In Need Of Loan
We stand apart from other lenders because
we believe in customer service just 2% interest rate,
both long and short term you have come
to the right place I'll advise you can contact us via email
abdullahibrahimlender@gmail.com
whatspp Number +918929490461
Mr Abdullah Ibrahim