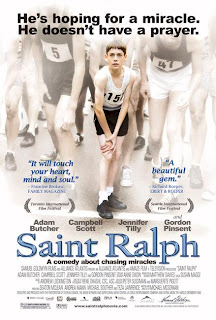 So we had a chance to watch Saint Ralph, and I'm still stuck on who the target audience was meant to be.  It's set in a Catholic School in 1950s Hamilton, Ontario.  It's a good film, but the beginning of the film had a little too much rascally attempts at "touching yourself in an impure manner"!  Regardless, once the activity is discovered the penance assigned by Fr. Fitzpatrick (played by Gordon Pinsent) is to have Ralph join the Cross-Country team. From then, a chain of events happens and he decides that winning the Boston Marathon is the best way for a miracle to happen and for his mother to come out of the coma she has fallen into.

There are some interesting parallels with Ralph's young faith (Catholicism) and running.  One striking thing was that for a miracle to happen, the participant had to be pure, prayerful, and have faith.  Regardless of the fact that we don't make miracles happen, Ralph begins on his quest to win Boston.  On the way he finds Fr. George Hibbert (played by Campbell Scott) who promises to train him if he doesn't talk about miracles. For me this parallel means, dedication, training, and trust.

There was some good training, and a number of really interesting (if fantastic) quotes from an invented book by Simon Longboat.  I'm guessing they took the name from Tom Longboat a Canadian Runner, Marathoner, and Olympian of the early 1900s.  I like the fact that it seemed to be filmed in Hamilton, and used the local names (plus Ralph runs the Around the Bay race - that predates Boston by 3 years). 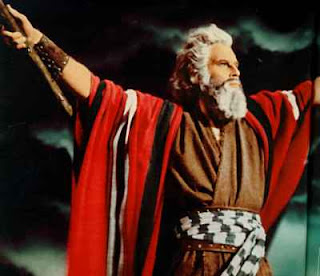 As you know, I day-dream about running in Church often, but it's the readings that are doing it!

Last week Moses went to a game of British Bulldog between the Israelites and the Amekelites.  Every time Moses cheered with the staff he got from God, the Israelites would start winning, every time he got tired and dropped his hands, the Amekelites would start winning!  This only shows how much cheering helps people who run - we really really need you!!!

Then this week began with this reading from Paul:
"Beloved: ... I have competed well; I have finished the race; I have kept the faith. From now on the crown of righteousness awaits me, which the Lord, the just judge, will award to me on that day, and not only to me, but to all who have longed for his appearance."

My conclusion is that our history, faith and running are so dependent on each other that there's no way to fight it!

I leave for London on Wednesday evening for my graduation ceremony.  I'll probably continue to be AWOL as I have been for the last couple of weeks from the blog world (with timed posts), but once I get back my schedule may clear up a bit.  BTW if you get a chance on Thursday please save me a copy of the Globe and Mail.  Our graduating class will be announced in it with our pictures.
Posted by Andrew Opala at 12:59 PM

Congrats on the graduation.

I loved this: history, faith and running are so dependent on each other that there's no way to fight it!"

Agreed. love it. Some of my most spiritual moments are when I am running, maybe weird, to some, but I love it.

I keep hoping that touching myself in an impure manner will make me a better runner.

I have no doubt that Jesus, if he where to come back as a mortal again, would be a sick ultra-marathoner and wear Newtons.

In all honesty I am very spirtitual but a bit of a lone wolf in terms off religious affiliation. That said, there have definitely been times running and biking (not yet with swimming) where the spiritual moments have been off the charts.

Congrats on your graduation! You are quite accomplished - very impressive.

I love the link you make with the Bible and running and history. Neat comparisons :)

Best of luck on your trip!

I agree wholeheartedly with the connection between running and spirituality, great post!

Congrats on your graduation, have fun!

Happy graduation! I'm looking forward to lots of pics. And I swear the iFitness belt is coming!

This is a local film indeed - one of my friends happens to be the Assistant Editor on it! Congrats on your graduation - savour every moment!

Have fun in London! It's one of my favorite cities =)

I echo what EMZ said.

My husband and I have had long discussions about races usually being on Sunday and my missing church... but I am certain that some of my most focused, most prayerful times are while I'm running. In fact, if I can focus on other things in need of prayer, I can sometimes miraculously distracted from my own pain.

You forget that Moses's brother in law and another guy (I forget his name) actually held up Moses's arms in order to support him. So along with cheers sometimes we need additional support to lean on. We are all in this together. Enjoy your time in London and congrats.

Congrats on the graduation! Enjoy London. I love London.

Very interesting, I've never seen that movie. I doubt it is available in SA. Many of my most spiritual moments happen while running.

Congratulations with the graduation! Enjoy London.

St. Ralph did seem to have it's various story lines wander a bit' but still a cute movie that does talk about running.

Congrats on your graduation.

One of the guys in one of the running forums has a signature that says that he would rather be in the mountains pondering God than in the church pondering the mountains. I know what he means.
To me Saint Ralph is about hope, trying, getting prayers answered in the most unexpected way.
Congrats on you graduation and say hello to London from me. Hope you will have enough time to enjoy this great city.

I love the film Saint Ralph and thanks for a bit of history; you've made me want to look it up!