Thought I would take my cellphone with me, a hand-held bottle of water and music in the week before the race, but the bottle was dropped from the list when they said there would be 3 water stations on the course.  Then music dropped because I recall my experience from the 5k where is was as much of a distraction as an aid, and the phone dropped from the list race morning when I jogged a bit with it in my shirt-back pocket and realized I didn't want to hold it nor have it bounce around at the back.  OMG I thought, now all I have to do is run!!! 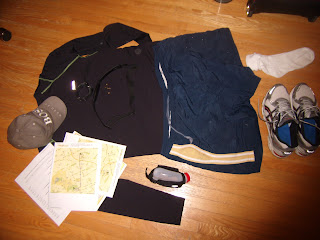 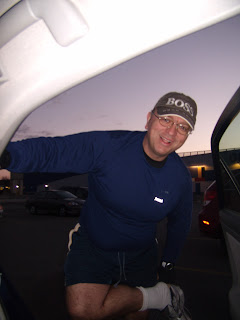 Was a little less nervous for this race at start time - did some drills (quick feet, goose step, butt kicks/high heels, high knees) and jogged for about 1/2 k at around 8:45.  My wife left the start area to drive 15 minutes to the finish area before it was closed to cars, so it was me alone in the running universe for an hour of waiting!!!! (Peed 4 times in honor of the occasion.)
There were over 1700 sign-ups for the combined start of the 10k and 5k race.  10k racers had orange flared bib numbers and orange ribbons pinned to the back of their shirts. It was a mass start with two separate routes to the joint finish line deviating at about he 4k mark.  While I stood in the pack I thought of my wife and how great it will be to hug hear at the end, my deceased parents, my family, Jill my coach, Adrienne who said she would pray for me at Church, EMZ and number 161, everyone who was sending me "rock it" and "you'll do awesome", and those running in the Toronto and Denver Marathons.  I felt so great knowing how much my life had changed in the last 5 months!!!  Since I felt this was a training run I didn't want to have a lot of people from the family here so my wife and I had a Sunday morning date.
Start: 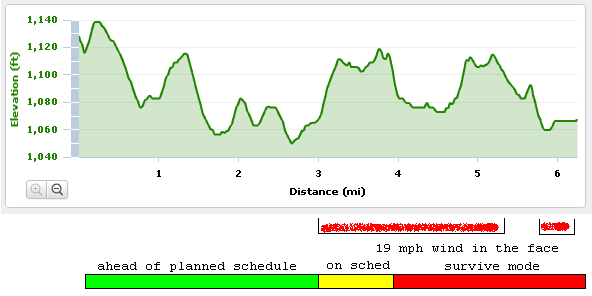 I started near the back of the pack - the race was going to be fast up front (at least twice as fast as I could run) so I chose to run in a group running near my speed.  The first 1/4 mile was wonderful.  With no music to distract me, I heard the gentle tapping of hundreds of feet as people jockied the turns from the Conestoga Mall onto King street and under the parkway bridge.  I was jogging with the pack and was running sub-6-min-ks(sub-10-min-miles).  The feeling was exhilarating - I had killed a lot of the panic breathing with my warm-up and the body was performing!!!!. The first 3 miles put me in advance of schedule below my 7 min k (11 min mile) pace.  At about the 1 1/2 k (1 mi) mark people began to settle in to small talk.  I could hear very loud music coming from some people's ear plugs!
From mile 3 to mile 4 was a 70 foot climb, but it was complicated by a 28 kilometer per hour (19 mph) wind that would be our friend for nearly the rest of the race.  At the 4 mile mark I was just faster than my pace that my coach and I had chosen.  There was a very pleasant down hill at mile 4 that gave me a burst of energy and confidence, but where I should have had a complete mile of consistent striding I slowed down for water.
The views were wonderful, the last part of the run was through an old residential neighborhood of early 1900s homes with old mature trees, and lots of yellow and red maple leaves rustling on the road and lawns.  The volunteers really kept us going at each turn and intersection cheering us on and clapping.  That looked more tiring than what I was doing.  We went through the campuses of the Universities of Waterloo, and Wilfred Laurier.
Making the final turns ... there was a simple climb to the finish line and then a sudden burst of that wind again.  I wanted to run faster - really.  But I had no energy left!  None.  I was even passed by someone in their final kick (wearing lulu lemon!). 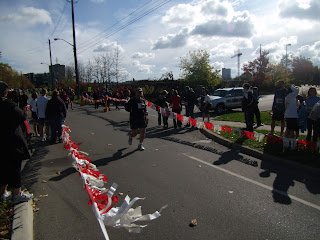 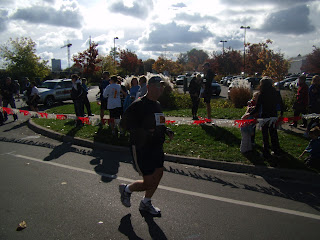 I was pretty much last in my AG, sex and weight groups - and I'm very happy!

There was a rock band, fruits, bagels, hot dogs, pizza, soup and lots of water and sport drinks for participants and cheering squads! 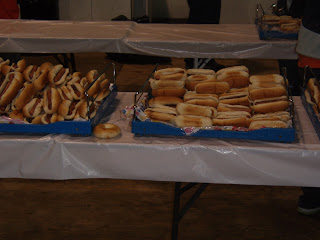 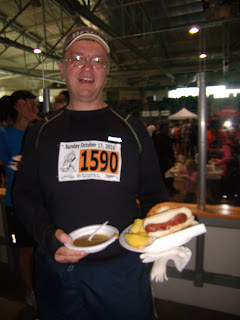 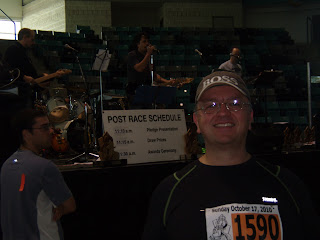 Key Lessons:
Thanks for your support.  Having those messages pop up on my blackberry while I was getting ready for the run was great!

Great Job Andrew!! But NEVER get passed again at the end... no matter what they are wearing. Lulu is for mid race motivation ONLY! Use as directed!

OK that's your problem. You need to lose the BB and get an Iphone.

Seriously, like I said yesterday, you are only racing yourself and you beat yourself by 5 mins. But you get that based on your comment about being happy.

Yay for a PR! Every race is a learning experience, and it seems as if you're taking that to heart. And that postrace food looks GOOD!!!

You were SO not last in your age group, sex, weight. You killed all those people at home on the couch and never strap on their running shoes or dare do what you did and do everyday. Killing your time by 5 minutes! Seriously that is impressive. I would be totally stoked if I could do that, sounds like if you can do that coach is going to up your workouts. That's the good and bad news of running faster. :)

Congrats Andrew! I'm so proud of you!

A PR - you need to send Jill a bonus check. It did sound like you probably lost 5 pounds by jettisoning the gear. Keep up the great progress.

you so totally rock.

Oh my gosh. You did great! WooooooHoooo!!

You should be very proud of yourself. :-)

Way to go congrats on the PR!!

Congrats on the PR

YAY on the PR!! Congratulations!

Hey stud! That does NOT look like an easy course. Congrats. Nice weiners at the end.

I'm getting a bonus check from you and Kovas?? Sweeet! Ok buddy, no more paying the lululemon chicks, you're on your own from now on!!!

wohoo we all knew you would PR, so glad it worked out!

Great job and way to rock out a PR. Difficult winds become your friend when they are at your back.

Way to keep it simple!

You rocked it! Congrats on the PR!

What a spread at the finish.

Seriously, congrats man!!! Between the killer course and the gail force winds, I'd say that you have at least another few minutes left in you at THIS level of fitness. Just wait until Jill has another few months at you?!

Hard work paid off. Hope you are really patting yourself in the back. And the grin on your pictures says it all.
Great job!
So what's your next race? :)

Great race! Congratulations on the PR

That's a great pace. And I totally agree with Adrienee... excellent run. Congrats. And for the record, I am a total wimp in headwinds, it's a confidence killer for me and slows me down more than it should... good for you for pushing through it.

Congrats on a great run. Post-race hot dogs seem like a great idea.

That is a BIG PR! Congratulations!

Nice race Andrew and way to penetrate the wind. Great job on the PR and surely many more to come.

Wow, look at you - you've really shaved some time off your running, congratulations!

Fan-freaking-tastic!!
You know, on my 1st 10K I only beat TWO people. That's it. And I totally didn't care! It was a crazy, hard trail course, and I was passed by tons of 20K racers --- but I didn't care. Just getting out and doing it makes it all feel great!
Congratulations, you did awesome and totally would have kicked my ass! :)
~RR

Your posts are impressive. That is all.

Congratulations Andrew! 5 mins on a 10k rocks! You have come a long way, you can be very proud of yourself. I am proud to know you.

Looks like it was a fun race. I like that you did it without music this time....I also think it is fun to hear the sounds of the race itself.

I printed this one to read at my conference. You did amazing brother. AMAZING. It's truly incredible seeing what you’ve done in just 5 months. YOU LOOK AMAZING! So what…I’m hitting on you. And your drills made me smile out loud…”quick feet, goose step, butt kicks/high heels, high knees and jogged for about 1/2 k at around 8:45”…don’t look now Andrew…you’re a runner. You look like a vetran...and you're officially a runner. Congrats.

Great job Andrew! Way to set a PR! You learned a lot of good lessons out there and it sounds like you had fun. That's all that really matters. :)

This is great, congrats!!! Wind is brutal. I'm super jealous of the hot dogs at the end!

Way to rock that PR!

Great job! Way to beat that goal set in advance!!!

Congrats on a new PR! And the hot dogs at the end is definately a first that I have seen!

Congratulations on a race well done!! You've improved and it's good to see your latest post has speed work and that is obviously inspired by a coach. Having someone create workouts and a schedule is very helpful. Keep up the good work Andrew.

I think your "lessons learned" are perfect.