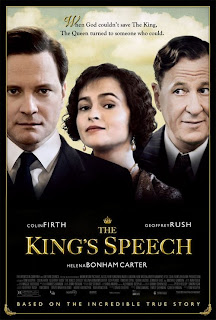 Some points you should know about me as a reviewer:


Overall, this movie was quite good.  The only negative point is that if you don't know much about Wallace Simpson and Edward VIII (like my wife), you won't understand what a shock the changes were for England and how the way "Bertie" interacted with him developed the main character.  Of course this is not a fault of the movie, as you need to be a little educated to understand what was happening, but the movie sort-of assumes you should know what is happening.  The movie seemed to float by and was well paced, and did not fill me with too much pomp and nonsense about the British Monarchy - it presented some key people as likable.  They say some dirty words in it - and it's actually funny!
So my review of this movie (that my wife dragged me to) is:
▪▪▪▪▫ 4 out of 5
Not a running movie, but I felt surprised enough by it recommend it.
Posted by Andrew Opala at 8:00 AM

This movie is high on my list to see, so glad to hear a positive review. I'll probably have to drag my husband to it also--maybe I'll have him read this before!

thanks, andrew. i don't go to the movies often but this was one that i've wanted to see.

I saw this movie this weekend and was also pleasantly surprised. It was a bit of a throw back movie - a good story and acting without all the crazy over the top stuff that so many movies have.

That's nice but what I really need to know is what did you think of Tangled?

You like witty, clever, and intelligent humor? So that's why you come to my Blog.

I'm probably gonna see it this week - for my money you & Kovas are the two wittiest bloggers I follow. Chris K is pretty funny too, but? The funniest thing I've read was last week when you commented on Chris K's "manly" post ... "I'm on a horse" ... Hahaha!

I'm with Chris - obvs, the reason you read my blog so much is because of my intelligent humor.