The Secret to Everything 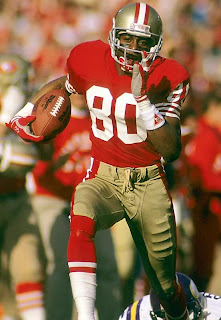 Jerry Rice was born and raised in Crawford, Mississippi.  The young Jerry, developed strength in his hands while he worked with his father, a brick mason.  As a high-school football player, he was selected to the All-State list, but was made no scholarship offers from the first division college teams.  In the early 80s (coming from a second tier NCAA college) Mississippi Valley State's coach Archie Cooley made him an offer to play at Itta Bena, Mississippi and Jerry accepted.

From 1981 to 1984, he lead the division in receptions, receiving yards, and named the first team All-American. He also set a single game record by catching 24 passes.  But when it came to the NFL draft, he was chosen 16th.  (The USFL had drafted him 1st!)

For 15 years in a row he managed to reach 1000 yards receiving; he was named player of the year 3 times and rookie of the year in 1985.  He made the Pro-Bowl 13 times and the All-Pro team 11 times.  In addition to having three super bowl rings, he is currently rated as the #1 NFL Player of all time!

People would write to the coaching staff of the 49ers and ask them for information on Jerry's training.  The coaches didn't want to release the information, not for fear that another team would learn the secret, but that they were afraid that people would hurt themselves. Rice would run 2½ miles nonstop up hill (at The Edgewood Park and Natural Preserve) each and every day during the off-season. Then his cool down was ten 100-yard "Easy Stride-Outs" up the first leg of the hill! He would also tackle more conventional training regimens with similar intensity.

What was the secret to his success as a football player?  Rice said, "It was about being able to put your body through pain." And that ability was driven by his desire and love for the thing he was doing.

Good luck runners!  You are called to be brilliant!
Posted by Andrew Opala at 1:23 PM

So you are saying the secret is pain management? Or management of pain? Maybe it's inflicting pain on your competitors?

Are we paying two-hand touch, flag, or tackle football? Will Jerry be there?

So wait, you are saying my training as a runner will allow me to become an elite NFL WR?

I'm surprised the CFL didn't get him.

I liked it, and I get it. Don't let those jerks get you down... Can't say a serious thing on the internet without getting a bunch of wanker comments can you? heh.

I think this is a streak! Guys feel the need to comment on a macho NFL post ... maybe I need more of these. I have no ability to talk about Capri pants and women's jewelry.

Guys, guys guys. Let me spell it out to you. If you get paid millions of dollars for it than you run your ass up the hill no matter how bad it hurts. The end.

Great video! It's awesome to see someone that is so passionate about being the best they can be and pushing through/passed the pain and being great. Thanks for posting this.

Little known fact... hill running was the key to his NFL success, where capri pants and women's jewelry would prove to be the key in his Dancing With the Stars success. Improvise, adapt, overcome.

I hate to be the serious comment on this post, but I loved the video and the message, very inspirational!! Thanks :D

Great post! I always think it's interesting reading Jerry Rice stuff. When I was young, my year-round swim team practiced at Sierra College -- where the 'Niners held practice in those days. Sometimes they would even be pool running in the shallow end of the lap pool while we swam in the deep end -- it was like ocean swimming! Anyway, he was sort of "known" for being a jerk. Once he almost mowed down a bunch of us in his Corvette at a big state swim meet.

But as I've gotten older and I've seen him on TV, etc., I wonder. I wonder if maybe we were just hogging the road and then decided it would be cool to say Jerry Rice almost ran us over. I can't remember what REALLY happened. And I wonder if the jerk reputation was real or not. Maybe people just liked to speculate. Not sure. Either way, he's a pretty amazing athlete!

I could carry on about how cool he is ... and how much I liked him on Dancing with the Stars... but I'll just say this (and it is sooo deep and really adds to the conversations here)...

i loved this post. and sugar, i'll be happy to help you with carpi pants & jewerly. ;-)

Hated when my team played against Jerry Rice because he would make us pay. He is a stand up guy. Great leader. Good video.

I love his attitude!

What is not to like about Jerry Rice. Total class act. That video was awesome. He's so dreamy too.

Thank you for the inspiration! Very cool :)

You don't have to be a niners fan to love Jerry Rice. The trail looks familiar, wish I knew which one it was.

Great story. I never knew that about him. Very impressive!

This is actually an interesting concept. I remember reading an article about elite marathoners and how they have an extreme ability to push through the pain. They are running for 2 hours at 95% effort (or something very high). Honestly, I think Jamoosh was right in his comment…. As I’ve gotten faster, part of it is conditioning my body, but a lot of it is my mind too. Knowing what pain will go away when I stop (burning of the legs, etc) and what pain is injury pain and I need to stop NOW.