How come this guy I don't even know is building me a house of hurt?  I did my cross training today with some progress but a lot of exertion.

Adam (@ the boring runner) asked a good question about tracking your training. Do you use an online site, software, or hardware like a watch. I started to use dailymile.com just because it had a widget, but I've found some cool stuff on other people's blogs that dailymile doesn't produce. But in the end you want to have access to the stuff that helps you run better and more enjoyably - and not necessarily be part of a social site.

I think what would help me is something like a combination of a place to input your running, and a place to help you diagnose the run to tell you where you need to improve.  (Plus an eating and hydration calendar.)

Here's a specific example: I want to run a 5k in about 4 weeks - my first.  I picked a target time that is cosily in the back of the pack for my age group.  Then I started training and I didn't know how fast to run my tempo, endurance, and EZ runs.  So really I sort of wasted 8 weeks from this point of view.  However I saw the Macmillan Running Calculator and it told me some stuff about what I should be running.  But I need to find some strategies like ... [making this up] try to run your first 3 splits 15 seconds faster, but maintain for the next 6 or something like that.  I just read on Mark U's site about "negative splits" in the Kenyan Way.  Something I will experiment with as well.

Another joke from Fr. Ron: 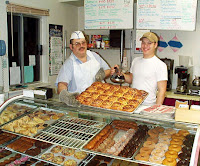 A woman decides she will stop eating sweets for lent.  She is tempted however, because everyday she has to drive by this bakery, and the smell flowing into her car is unbearable.  But she is strong and decides to change the way she goes to work.  Unfortunately, she discovers her route is continuously changing because of detours and construction, and she ends up driving by the bakery.  She thinks to herself, "Maybe God wants me to eat sweets - maybe I need to discern what He wants."  She thinks a little more and says, "Ok, if when I pull up beside the bakery, there is an empty spot it means that God wants me to buy myself something."  And wouldn't you know it a spot appeared on her eighth time circling around the parking lot!

I'm on Facebook (http://www.facebook.com/andrew.opala) and have about 759 "friends".  I actually have about 60 friends and the rest are people like me who think Facebook is a game and the biggest number wins.  Anyway, I have been getting these very annoying marketing announcements and invitations for helping me "self-actualize".  The only problem with these invitations is that the life shown in the photos of the lady that is sending them too me are terrible.  It looks like she's always BBQing road kill on the side of her home at the trailer park.  And she's got captions like "here's my other husband also named Darryl".  Where does she think I am not self-actualizing?

Anyway Twitter isn't any better (http://twitter.com/AndrewOpala).  I have about 35,500 followers and I can't bare to read the timeline - loads of emails on how to get 100 followers a week from people that have about 600 followers.

On both of these sites I find that running and learning about running is impossible.  What do you think?
Posted by Andrew Opala at 11:41 AM

your jokes hurt my brain.

Loved the one you sent yesterday.

That's a lot of cross training...I think I'd be in pain after doing all of that. Glad to hear you're making progress.

I struggle with Twitter, and to an extent FB. If you think of them as a business extension ,they really make sense. I'm disappointed in DailyMile, because they have such a limited stats history capability. I'm leaning towards Beginner Triathlete, which seems more stats oriented, not so social.

EMZ - Jamoosh is just a virtual task master. He doesn't know me from Adam (Eve's friend). I'd bet on you anyway even if he was a better runner.

Heather - the weights are normal for me. I can't sleep unless I move a fridge around for half an hour or put the sofa in different places in the house. Got hooked in eight years of high school and college football.

Kovas - i'll try it out ... http://www.beginnertriathlete.com/default2.asp

Wow, you are on a serious roll!

I track all my mileage at RunningAhead.com.

I don't multitask very well. Since I have started running, I can't seem to do other things as faithfully as before. So, kudos on following the hellacious looking cross-training plan.

I think you are incredible; combining those weights and Jamoosh's insanity!

I use buckeyeoutdoors.com for tracking my workout, it has it's limitations but I like it so far, started in 2008 went to running2win.com in 2009 and came back in 2010 I have a daily mile account but haven't quite figure it out yet

you are on a mission! Awesome work and commitment. that cross training looks mad and I train a lot! I have a couple of run groups in Mississauga area, if you want to come out let me know and I will let you know where we are at! Cheers and happy training!

Thanks for giving me another reason to skip any of these challenges. I'll just continue to do my thing... I use a very extensive spreadsheet and also buckeyeoutdoors (only for the sidebar really). We have quite a good South African running network on Facebook. Also a good forum. Twitter...not for me thanks.

I am a shoddy tracker. I do Daily Mile sometimes, write on a calendar when I think of it, may or may not log something in my iPod. I do most definitely follow my marathon schedule, everything else is incidental.

Love the joke, too funny! Good job on the pain workout, I am not doing the Hard Core stuff. Ouch, Ouch, Ouch!

Tapering: The art of resting. For your 5K, you will probably want to taper for 1-2 days. Rest, hydrate and a small carbo-load (pasta, bread, etc). Stay away from whole grains 2 days before your race. What you eat 2 days before the race is more important than what you eat the day before.

You will do fine on your race. I think you are making it too technical. Go, run, have fun! Remember, it is really just a party in disguise ; )

Hey Andrew! I just stumbled upon your blog after reading an article over at "Run to Win" and LOVE it! Much like you, I'm training for my first 5K as well and am having a blast not only on my runs, but interacting with fellow bloggers as well.

Regarding your question about keeping track of your runs - I also started tracking them with DailyMile which really isn't bad for a starting point, but after a friend recommended that I purchase a Garmin Forerunner 305, I had my world ROCKED.

That thing is unbelievable and has added an entire new dimension to my running. Not only will it plot my runs on a map, but it logs every single stat you could ever want to track - heart rate, elevation, pace, lap time, distance, calories burned, and the list goes on.

On top of that, it effortlessly syncs to Garmin's website (Garmin Connect) which allows you to not only view your runs and track your progress in a plethora of ways, but you can even embed your run information directly in your blog posts. I've started doing that at my blog instead of manually typing everything - SO much easier, not to mention, better looking. Oh, and you can even import the Garmin data into DailyMile!

Anyhow, now that I've won the "longest comment in the world" award, I'll bid you farewell. Good luck on your training - you have a new loyal fan to cheer you on!

I agree that neither are really all that good to track running. I think that you may be on to something with the analysis of running website. What you are talking about is essentially a virtual coaching website. Hmmm, you have my wheels spinningnow.