Snot Rockets are About Hydration 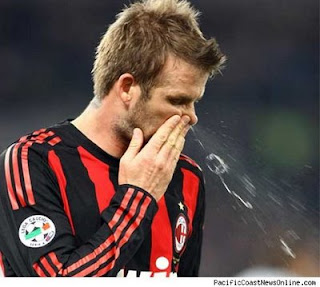 Nobody wants to be called a nose-picker.  Often, on a run, it's hard to slow down, scramble for a tissue, gracefully blow your nose and then gently fold up the tissue and put it in your pocket.  There is a solution - the snot rocket.

A snot rocket is the forceful expulsion of snot/phlegm/mucous from one of your nostrils while the other nostril is held shut.  We often do this with a tissue placed to our nose, but the snot rocket is naked.  The speed of the expulsion is important: to slow and the ambient air decides where it will land, while too fast and you may get out of your breathing rhythm for several paces.  Targeting is also an issue.  Since Eye-Nostril coordination is not learned from an early age, aiming and hitting a target is difficult.  Hitting a target while running is very difficult. 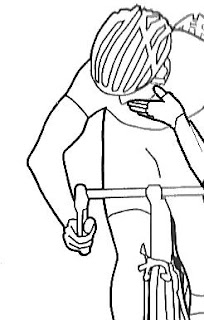 When running you should turn your head around your vertical axis to the side you want to launch to, then slightly bow your head forward into the running direction.  This will slightly constrict the airways, increase the velocity, and make sure the rocket is launched to the side and not on your shirt.

The launcher has an option of launching to the open or closed nostril side.  If launching to the same side (like the illustration), shoulder caking can occur, if launching to the alternating side, side caking can occur.  Most seasoned launchers make the move to the opposite side.  It looks a little like they are about to smell their arm pit and then whoa, a snot rocket comes out.  The under-arm launch has the bonus of being placed immediately into the flowing air stream.  The over-arm launch is covered by the front of the hand and the launch occurs in the turbulent wake.  Just like a knuckle ball, you don't know where it will go.

For heavy work and sports situations where grace and beauty are not true to form, and where the event is outdoors (outdoors is very important), the snot rocket is an acceptable way of clearing objects out of your breathing passages to continue to function at a highly geared level. Try it.  It is efficient, natural and good.  Not everybody does it, but everybody should.  Happy launching!

One of the haserdz us b-footerz worry about on the roads...

This was awesome. Neil, be careful that you don't slip on any road mucous lol!

Where do I start making a comment about this post? Um, well, it was different I guess. Quite informative actually. Sometimes when I feel like throwing caution to the wind I use my opposite hand to close the nostril. BTW, Andrew, I know that you have gone big time (41 Followers now!), but I am referencing you on my next post.

All I can say is after 29 years of running I consider myself an expert at this...

Thanks for the advice. I hope to put your technique to the test soon.

Ah, I see you've done research on this topic! The etiquette tips are good- something I'm worried about in a packed winter race.

Dzien dobry :)
As long as we have a dry summer here I should not have any snoot problems. I will bookmark your post for colder months though.

The look on his face was priceless, he was horrified, and I could only laugh.

Nice to see that you've done your research! How is your snot rocket technique? I haven't had to put mine to the test since last winter, but this reminded me that snot rocket season will be approaching :)

Wow. That's more than I needed to know about snot rockets. LOL

Good job on the 5K run too.

I agree, Awesome post. If I had never had to do a ston rocket this would be very informative. Unfortunatly I had to learn my trial and error how to do one. It was not pretty... I don't know how many times I was up a trail with my ankle covered in snot LOL!

Great post. I am always paranoid when I have to spit during a race. I'm scared to death of hitting someone who might be passing me. I can't imagine how much worse a snot rocket mishap would be.