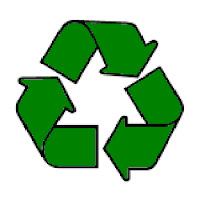 Today was a decision day for me ... my Hal Higdon 8-week program is tapering down to prepare for a race in two weeks, yet I have no race scheduled, so I was considering extending the running load 10% a week for endurance and tempo runs and then tapering two weeks before my birthday run.  I was also considering completing the training, running a fake 5k with me as the only entrant and then starting a short race prep in the intervening 3 weeks between the fake and real races.

Well all my run maps ... I have lots at different distances and split-time milestones ... disappeared from my office ... today was garbage day and I think I might have dumped them into the recycle bin.  Actually all the maps expect one: the 6.5k (4 mi) track that I ran on Friday.

So today instead of running the 4.8 k and tapering down to a race I ran the 6.5k to extend the schedule.  It looks like garbage day decided what I am going to do.  Running on Mondays is terrible when you run by all those rancid garbage cans and bags.  I have gained new respect for garbage men and women. 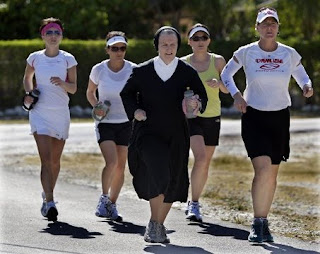 Sunday's mass surrounded the Assumption of Mary.  I don't have a public reflection on the readings, but I would like to tell you that many of the parishes in our area - most of the Polish one's anyway - organize a 6 day walking pilgrimage to Midland and Martyr's Shrine.  These walking pilgrimages coincide with others around the world in the more traditional Catholic areas.  You basically walk with back packs, tents, food, water, etc. for 6 days about 25 k a day to a shrine dedicated to Mary. Sleep on farms and camp sites and then you celebrate a mass at the end in a Marian shrine.  My wife and I did it 11 and 12 years ago, when we had a bit more time.  It's currently in it's 30th year in our area.  It's a very popular trip for many people in the parish.  I think this year there were over 600 pilgrims that walked the route with another 120 that joined from other parishes in Guelph and Kitchener-Waterloo.  So maybe my Sunday reflection is that running/walking/moving is often the key part of an adventure, while the finish is just one piece.  I often look at my finish-time without accurately reflecting on the value of the running I am doing.  I think over 100 k in 6 days counts as an endurance sport and it was invented - like - int the 16th century!  So Catholic Faith has to be for running as a part of a balanced life.

A young man has started a good part of his life right now - recovery.  But he is a little anxious.  I hope in the days to come he will sprout some hope in his young heart and begin to care for himself more.

I started this lunge challenge on Amanda's blog (5 miles past empty).  The main reason was for extending my stride length by a few hairs.  I've been doing the lunges and high-stair stepping during my weight training, and before my EZ run on Saturdays.  What I have discovered is that I don't feel any pain in the legs after the EZ run while I feel discomfort later in the day from the X-Training (only with the added lunges and stair-stepping).  I wonder if I should do lunges and stair-stepping as a warm-up before running?
=====
My car's in the shop today for its [mercy killing] check-up.  I'm working from home and I guess that means I am not working at all.  I need to close that office door more and not feel like I am avoiding my family.  But they are so cute!
=====
P.S. That wasn't Chicken!
Posted by Andrew Opala at 12:54 PM

Hey Andrew! The lunges I do are a walking lunge. I do them in my basement and can do 4 across the room. I start by the wall, step out with my right leg and lunge all the way down and hold it for a second or two. Then I come out of the lunge and bring my left leg forward and into the lunge position, lunge, and hold that for a couple seconds. I do that 40 times (20 per leg) and then I will get into lunge position and pulse it for a count of 10. I really feel it when I am done. However, I haven't been super sore following, but, I do lunges a lot in my classes anyway, so it's not really new to my body. I hope that helped!

I think the 6.5k was the correct run for the day. I hear you about running with the garbage out. A few months back the guys were on strike for three weeks and garbage was in all the streets for three weeks. Some places were impossible to run.

Yep, lunges are a perfect warmup. BUT, you can't overdo them. Do just a handful to get the blood flowing.